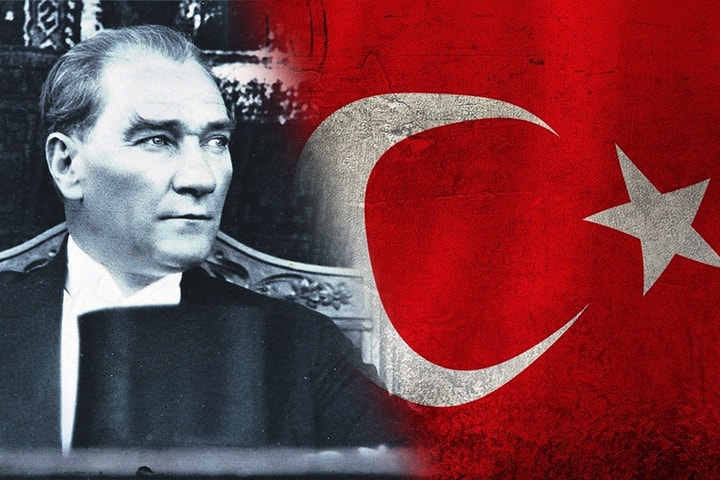 The surname law, which was adopted eighty-four years ago, forced all Turkish citizens to choose a surname for their family and forbade them to contact people by nicknames. People chose the names associated with their ancestors, historical events, related to the profession or the identity of the owner.

Therefore, the surnames of the Turkish people are very "young." The introduction of surnames in Turkey began in 1934 with the adoption of the “Law about Surnames”. Before that, the Turkish men used the name of their father with the addition of the prefix “oglu” (“son”) or the nickname of the family. Both were put in front of a personal name, for example, Muratoglu Ibrahim, Koselerin Mehmet). The Turks of the privileged class used a prefix of Iranian origin - zade (“born, son”), for example, Sami Pashazade Ahmet Bey. Surnames in Turkey introduced legislation on June 21, 1934.

This is described by Alexander Zhevakhov in the biographical book «Ataturk» (M., 2008): At the beginning of July 1934, the National Assembly adopts a law introducing surnames in Turkey. It was a very important and necessary decision. In the Ottoman Empire, the majority of the population had only names, which created great confusion in the country and could not meet the requirements of the new state. The law became operational at the start of 1935. Everyone tried to find a Turkish surname; foreign endings were banned. Ismet became «Inonu» in memory of the two battles he won during the war of independence. Nuri took the surname «Conker» - the name of the locality where he fought alongside Atatürk during the Battle of the Dardanelles. Foreign Minister became "Aras" - a name of the river where he negotiated. Khalida Edip took the surname "Adıvar" (“The one who has the name”), and Afet will become "Inan" (“the law” and “the faith”), another Kemal's adopted daughter - Sabiha, who became a pilot, took surname "Gokçen" (“Coming from the sky”).

And, of course, everyone's attention was attracted by the Mustafa Kemal’s future name. Saffet Arıkan, the former secretary general of the People’s Republican Party, suggested the surname “Türkata” - which meant “father (an ancestor) of the Turkish people”. Everyone approved such a choice, but most thought that the «Atatürk» name sounded more harmonious than «Türkata». On November 24, 1934, the National Assembly unanimously proposed Gazi to become Ataturk. Gazi is a true Turk, in the full sense of the word, and he possesses all the father’s qualities, both kind and strict. Falih Rıfkı dedicated an article to this event, where there are such lofty words: “The future of Turkish history is inextricably linked with his name ... was it possible to find the most accurate name than Ataturk: Atatürk is an inexhaustible source, it is spouting water and summer sun that revives everything around. May he be blessed with this name! ”

Each Turk was ordered to take a surname before July 2, 1936. If this did not happen, then «vali» (provincial governor) or «kaymakan» (district head) gave the surname to this family. In addition to the “Law on Surnames”, on November 26, 1934, a law was passed on the “Abolition of prefixes to names in the form of nicknames and titles,” that is, «efendi», «bey» and «pasha». In accordance with Turkish law, the surname must be written in one word. It has no gender specificity. Last names in Turkey are inherited through the male line from the father to his legitimate children, without any change in form. Woman after marriage should take the husband's surname. She can also keep the maiden surname, which should put in front of her husband's surname.

The most common last name in Turkey is Yilmaz. By frequency of use, it is comparable to the English surname Smith or the German surname Muller. This surname has arisen from the personal name Yilmaz, which is of Turkish origin and is translated "one who does not stop at nothing." The second most frequently used surname is Gunes, which means Sun.